Our Web site is being Updated For BML Gateways ! Only Direct Bank Transfers and Cash on Delivery Accepted..sorry For the trouble ! Dismiss

The island of Malé is the fifth most densely populated island in the world, and it is the 168th most populous island in the world. Since there is no surrounding countryside, all infrastructure has to be located in the city itself. Water is provided from desalinated ground water; the water works pumps brackish water from 50–60 m (160–200 ft) deep wells in the city and desalinates that using reverse osmosis. Electric power is generated in the city using diesel generators. Sewage is pumped unprocessed into the sea. Solid waste is transported to nearby islands, where it is used to fill in lagoons. The airport was built in this way, and currently the Thilafushi lagoon is being filled in.

Many government buildings and agencies are located on the waterfront. Malé International Airport is on adjacent Hulhule Island which includes a seaplane base for internal transportation. Several land reclamation projects have expanded the harbor.

Tourism is the largest industry in the Maldives, accounting for 28% of GDP and more than 60% of the Maldives’ foreign exchange receipts. The GDP per capita expanded by 265% in the 1980s and a further 115% in the 1990s. Over 90% of government tax revenue comes from import duties and tourism-related taxes. Malé, the capital, has many tourist attractions and nearby resorts. The central harbor and port of the Maldives is located in Malé, the center for all commercial activities. Maldivian, the airline of the Maldives, has its head office in Malé  as does the airline FlyMe. Velanaa International Airport, on nearby Hulhulé Island, is the city’s airport and the principal airport in Maldives. 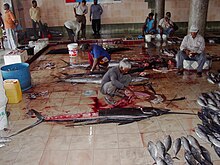 A Fish Market in Malé

The capital of the Maldives, Malé is known for its busy fish markets. Fish is an integral part of the Maldivian diet and it is a common sight to see office workers in formal white shirts and ties on bicycles after work taking skip jack home to eat. Trolleys packed full of fresh tuna or skipjack are carted around in door to door sales. Tuna however is the most important fish, and in recent years in the Maldives the industry has become more efficient, using tuna waste and residue to be processed into fish meal, an animal food supplement, further contributing to the economy. The tuna industry in the Maldives has been greatly helped by The State Trading Organization which rebuilt the efficient tuna cannery plant on the island of Felivaru. The canning process typically takes four days, and the plant has the benefits of modern technology and even a laboratory for research and quality control.

Dhonis are the traditional fishing boat of the Maldives.

The islands of the Maldives have an extensive fleet of small fishing boats, built domestically, each of which can carry about eight to twelve persons. These boats are called dhonis.

In 1995 there were 1,674 vessels, of which motorized vessels for coastal pole and line tuna fishing accounted for 1,407 vessels. Of the remainder, 5 were sailing dhoni (masdhoni), 48 were mechanized dhoni (vadhudhoni), 209 were vadhudhoni with sails, and 5 were rowing boats used to troll reef waters.

Based on a US$3.2 million loan from the International Development Association(IDA), most of the boats were mechanized in the course of the 1980s. Although the addition of motors increased fuel costs, it resulted in doubling the fishing catch between 1982 and 1985. Moreover, the 1992 catch of 82,000 tons set a record; for example, in 1987 the catch was 56,900 tons.

The dhoni, which with its variants, makes up almost the entire fleet, is a small open boat traditionally built from coconut wood, although wood imported from Southeast Asia and fiberglass is increasingly used. Originally sailing craft, nowadays these boats are usually fitted with motors. The main site for building dhonis is in Alifushi Raa Atoll. This boat building is a traditional craft in the Maldives, and young apprentices are still trained by skilled craftsmen. Boats crafted from timber take about 60 days to complete.

This site uses Akismet to reduce spam. Learn how your comment data is processed.